Maroon — paratroopers and all other Airborne units except 101st Airborne Division, other special operators (Civil Affairs, PSYOP) on jump status or under an airborne unit. Soldiers do not have to be jump qualified to wear the maroon beret.

SUMMER 1992 - Operations in Somalia began as a humanitarian airlift to relieve the starvation caused by years of civil war. Combat controllers operated landing zones throughout the country beginning in August 1992.

Early on, the commander of deployed forces could see the handwriting was on the wall:

“The strong get the food and the weak become reliant on the strong.”

Armed factions stole food and crushed the weak and the operation dragged on for months. Things in Somalia deteriorated into open warfare, particularly in the capital city of Mogadishu, and the United States felt the key to speedy resolution was the capture of Mohammed Farah Aideed, one of the more hostile faction leaders. The operation changed to an armed relief mission later that year.

SOMALIA VALIDATES SPECIAL TACTICS TEAM CONCEPT - A mission on 3 October 1993 would validate the special tactics concept in a most unpleasant manner. Reports indicated that Aideed and his lieutenants were meeting at the Olympic Hotel in downtown Mogadishu. Teams airlifted by helicopter from their forward operating base at Mogadishu Airport. Blocking elements were fast-roped into strategic intersections; as the main assault force moved into the area. Once in place, they rounded up combatants and suspects transporting them to a holding area in the rear. SSgt John McGarry and Sgt Pat Rogers were both assigned to blocking elements, and SSgt Jeff Bray accompanied the assault force.

As the blocking force fast-roped into place and set up they could see the incoming fire was growing more intense. Immediately, they called for the close air support by attack helicopters. SSgt Bray’s calls for fire quickly suppressed slowed incoming fire. At first, the mission seemed to be going well and they expected to be in and out quickly. However, as the assaulters were regrouping and preparing to move out, SSgt Bray received a disturbing call from the command and control helicopter, orbiting above. “Super 61 is down; move immediately to the crash site.”

The Somalis had downed an orbiting Blackhawk helicopter with an RPG; a shoulder-fired rocket-propelled grenade. The crash site was only 300 yards northeast of his team; unfortunately, those 300 yards were through a honeycomb of buildings, streets, and alleys. Each corner, window, and doorway was a potential hiding spot for a sniper or, worse, a Somali with an RPG. SSgt Bray’s team quickly but cautiously made their way to the downed chopper. The assaulters split into two elements and leapfrogged down the street. As one group bounded forward, the other provided covering fire. The closer the rescuers got to the downed helicopter, the more intense the gunfire became.

As they approached the crash site, Bray’s team could see Somali gunmen racing to the downed helicopter on parallel roads and alleys. The Somalis were thirsty for American blood. Other friendly elements were in the area in blocking positions. However, they had their hands full fending off other gunmen attracted to the crash site. Consequently, they were not able to lend Bray’s team any assistance.

SSgt Bray’s element began to take serious casualties and needed to get out of the street and into some type of cover. After repeated attempts, SSgt Bray was able to break open the doors to a small courtyard. He and his team members cleared the yard and the adjacent home, detained the residents, and set up a casualty collection point. This position also became the control point from which SSgt Bray would direct helicopter gun-ships attacks. Gun ships were overhead, but needed direction to attack the bad guys and prevent friendly casualties. For the next 15 hours, SSgt Bray directed helicopter gun ships onto targets as close as 10 meters from his position. Expended 7.62 mm shell casings often rained down onto his team’s position as the helicopters maneuvered overhead.

There were other combat controllers in the area that did not have contact with the gun ships. They relayed critical information to SSgt Bray, who then supported them as he directed the strikes. Several times through the course of the night, he exposed himself to hostile fire in order to accurately call in the helicopter fire missions.

For his actions, SSgt Bray was awarded the Silver Star, the first awarded to a combat controller since the war in Southeast Asia.

While the battle raged around the Olympic Hotel, other task force members worked frantically to find a route to the downed aircraft and their trapped comrades. Seven controllers were part of the effort.

MSgt Jack McMullen’s convoy was caught in an ambush before they could ever get to the Olympic Hotel area. The Somalis ambushed the lead vehicle by firing an RPG. MSgt McMullen was in the second vehicle, turned perpendicular to the road, and set up a hasty blocking position for the rest of the convoy. The four following vehicles turned around and quickly departed the area. In fact, they left so quickly that they left MSgt McMullen behind. For awhile, McMullen and his team were on their own, escaping and evading throughout the city as they tried to find their way back to the airport. After returning to the task force compound, MSgt McMullen volunteered to reenter the area with another convoy. This time he made the trip with a Malaysian tank. The second rescue attempt proved more successful. It diverted the Somalis’ attention enough to bring some relief to the trapped task force members.

As dawn broke across the city, the Somali gunmen began to filter away. The beleaguered controllers and their teammates regrouped, counted heads and loaded on vehicles for the ride back to the airport. The all-night battle was some of the most viscous fighting since Vietnam. The task force lost 18 men and sustained 84 injuries. General Aideed’s forces suffered incredible losses. Some estimates put the KIAs and wounded as high as several thousand.

All the controllers involved in the operation performed bravely. Some were recognized with Bronze Stars, including MSgt McMullen (including Combat V), MSgt Bob Rankin, SSgt Ray Benjamin, and SSgt Dan Schilling.

In keeping with Combat Control tradition, MSgt Rankin was the last military member off the streets of Mogadishu. 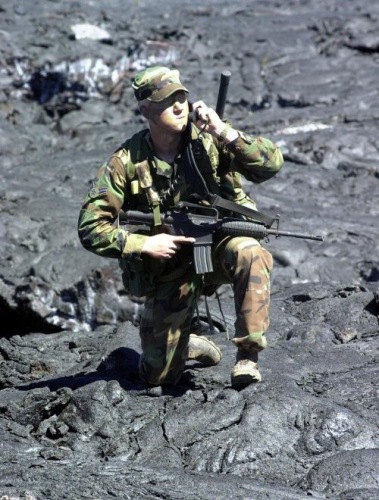